skip to main | skip to sidebar

Today was the NCAAA visit (the National Commission for Academic Assessment and Accreditation). Inspection Day! We had all been working frantically for the last few days, getting ready, and now it was all done and I was sitting at my desk waiting to be called for my interview.

I opened my office window, and a delicious breeze was blowing in - like an English summer day ... The phone rang, and I jumped (I always do!) - would I please come upstairs to talk to the Inspectors.

The Interview was quick and easy, and as I returned to the main foyer area, I became aware of the strange colour of the ambient light. 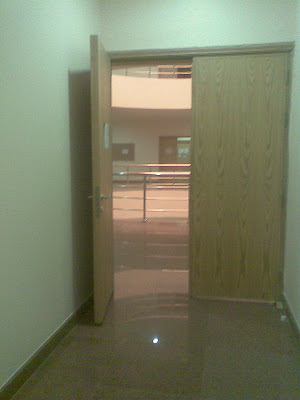 It doesn't really show in the photo - it was really orange. That seemed odd, as the foyer is lit from a skylight in the roof of the third floor. Us Aussies expect there to be a bush-fire around when we see this kind of light, only this was far more orange.

As I approached my office, I caught sight of the outside world - all orange. (And, again, the photo doesn't come close to the right colour.) 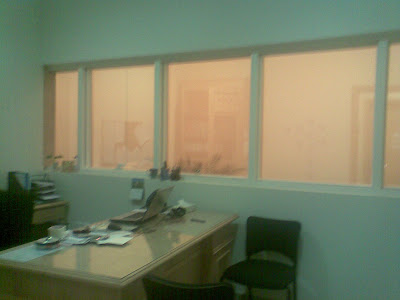 It just got weirder and weirder ... and then I remembered I had left my office window open! Oops!

I stood at the window watching cars mysteriously appearing and disappearing in the street, wondering why there were no crashes. A few of the cars had their hazard lights on. Most were clever enough to know that you don't put headlights on in a sandstorm because it just reflects off the sand and makes it harder to see.

The female students were all spooked, and desperately wanted to go home. We heard that schools elsewhere were closing and people were taking their kids home, which made the traffic much worse. The girls were all calling their drivers who came and took them home. Classes were cancelled.

Sally said she saw it arrive (I was in my interview at the time, remember) and she saw something like funnels along the horizon, moving around.

I can still taste it and smell it, everything is gritty.

After a few hours the light changed from orange to grey, and the dust slowly settled on everything instead of being in the air (inside the college). The place looks like it has been unused and shut up for months, except for our footprints as we made our way out to catch our ride home.

We saw it on the World News. They say they don't remember ever having a dust storm like this one in the city of Riyadh. 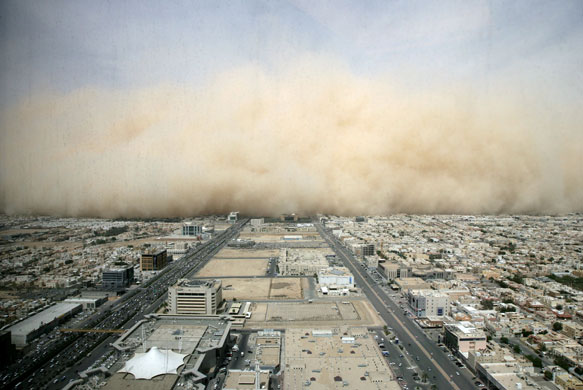 This as a photo off the Internet of today's dust storm enveloping Riyadh.
Posted by Ruth at 9:02 AM

Ruth
Butler, WA, Australia
I am officially retired and staying put in a quiet suburb near the beach, after living in the Torres Strait in the '80s (A MERry Life), 2 years in China (Howling Pigeons of LongHu), a year in Turkey (Turklish Adventure), working in the UK (The British Job, and Porridge in Norwich), working in Saudi Arabia (Howdi Saudi), holidays around the Pacific (Not Riyadh), working in Queensland (How woomba is TOOwoomba, and Brisbane Master Class), and working in Malaysia (For we are jolly good fellows).