skip to main | skip to sidebar

Where the desert meets the sea!

Some people have commented that the Kingdom of Saudi Arabia is like an endless beach. Well, eventually, at the end of the beach, there has to be an ocean!

There was to be a conference, over there on the East Coast of this great sandy country. 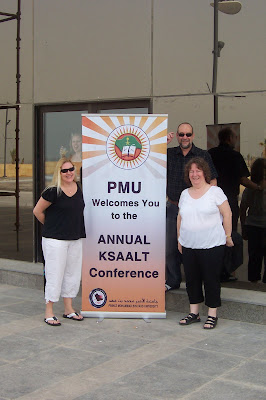 Sally wanted to go, and Nicole (in the window!) and Adam. Peter and I needed the break more, and Wayne (Sally's husband) was keen to hire a car and drive across the desert.

[It's a funny thing with driving cars here. Us ladies (of course!) can't have licences, and therefore can't drive at all. While he had a business visa Peter was fine to drive on his UK licence. But now that he has an Iqama (resident's visa) he needs to have a Saudi licence to be covered by the insurance. Wayne doesn't have his yet, so he had to drive.]

Anyway, the four of us set off in our rented Camry, out into the desert ... you know what a desert is, right? 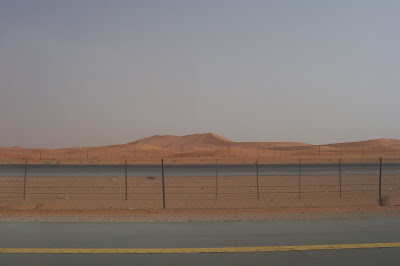 There were flat parts, and slightly rocky parts, sometimes the sand was sand-coloured, and sometimes it was reddish ... but mostly it was just, you know, desert. Four hours of desert, pretty much like you'd expect, around 40 degrees, going up to 44 in the red section.

Here and there we saw hilly parts, where the endless wind had ripped away the softer portions. And then there were really odd things, like an amusement park (still under construction) way out there ...! 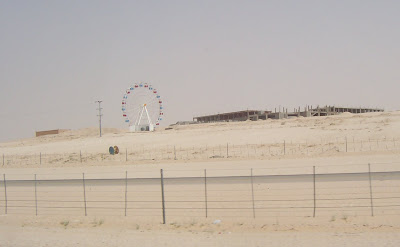 And here and there we saw camels, and wondered what they found to nibble on. 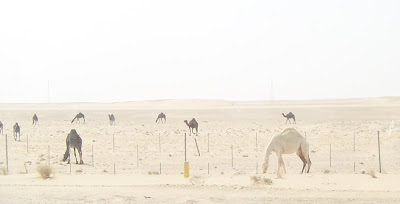 The road was entirely fenced, with only a rare "Desert Access" road. But in places the desert had overtaken the fence and was encroaching on the road - valiantly being held at bay by an occasional bulldozer.

There were, of course, the usual petrol stations along the way, and we stopped at one. It had petrol pumps, and the usual little shop, and a mosque - that's where the toilets always are. We went into the shop to buy some drinks ... out of the car air-conditioning (and wearing our black abayas!) it was very hot. 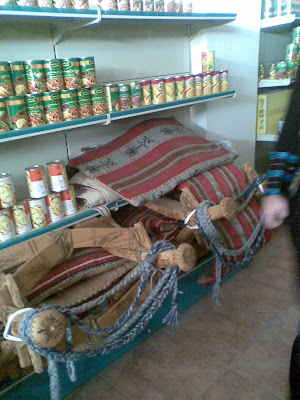 I was kind of amused in the shop to find all the trappings for one's camel, right there next to the cans of beans!

So what's it like at the other end of the desert, next to the sea?

Lots of these little tent encampments, outside the city of Al Khobar, a few metres from the water. 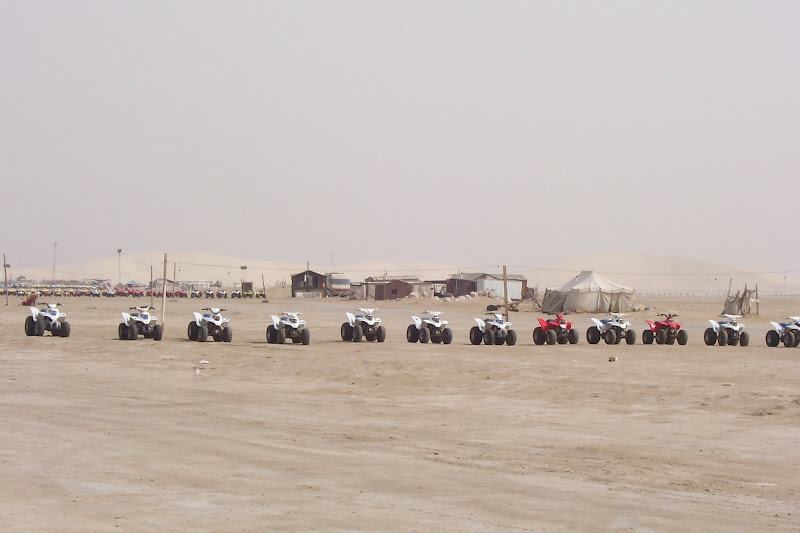 They make a living out of hiring out quad bikes to ride like crazy up and down those soft dunes. And usually there is a tired-looking camel or two sitting around. Some of them have hundreds of bikes, all sizes. Obviously this is not the right time of year for that, or maybe we weren't there at the right time of day ... there must be times when the dunes are crawling with quad-bikes.

So Sally went off to PMU for the day, for the conference. 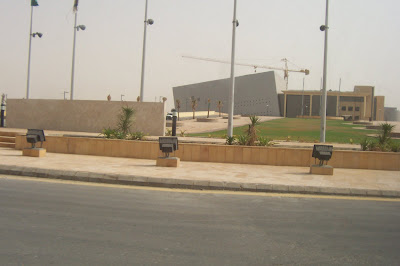 Funny looking place! They like their odd architecture. Can't help wondering, though, how long it can last with the desert crouching there right outside the wall. 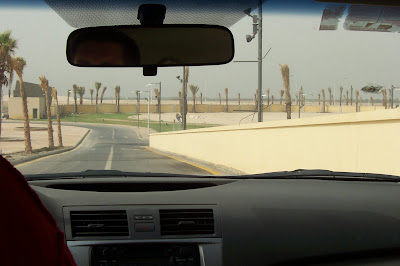 We were staying in a private resort. Most of the hotels in the area have swimming pools - for men. But Sally managed to find the Holiday Inn resort where they not only have a swimming pool (for the men) but also a little lagoon where the women are permitted to dip. 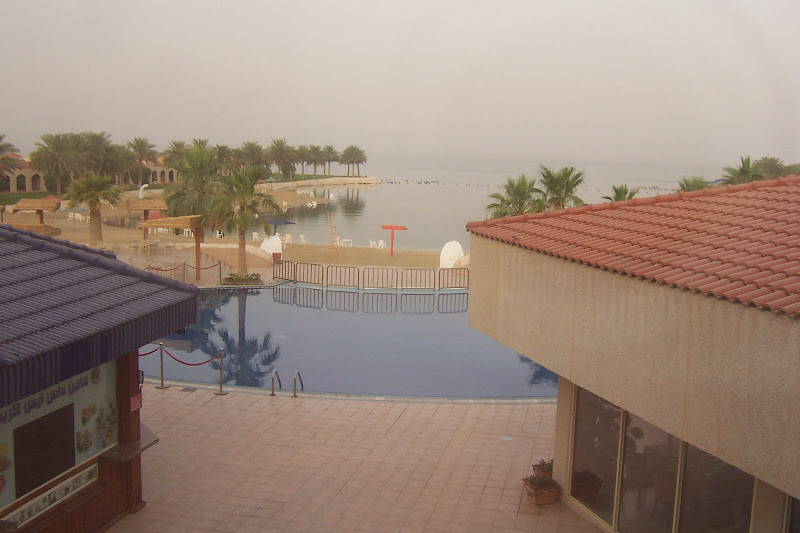 This is the view from our bedroom window! The pool is in the foreground, the lagoon beyond it, and beyond that the actual sea.

We took a little look around Al Khobar town, and went down to what is famously known as "The Corniche." 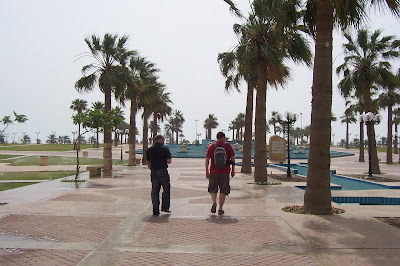 There was supposed to be water flowing through here - we picked the one (?) day they decided to clean it. 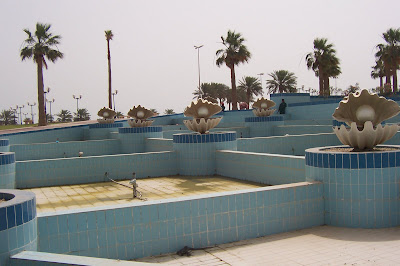 Must be quite specky normally. It seemed like a nice town. 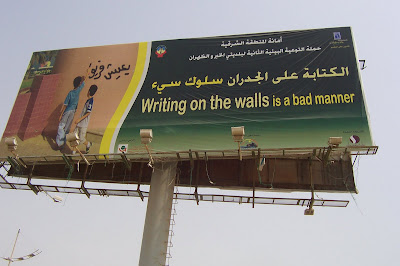 Not a whole lot of graffiti! We were a bit puzzled about this water tower 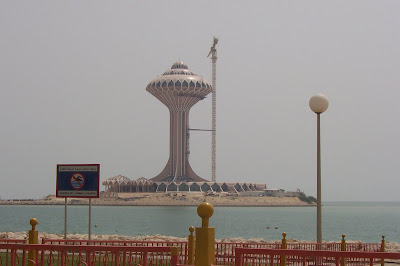 that seems to be in the process of being turned into a resort. Classy.

There were some places where families (but not bachelors) could hang out and play by the sea - a few shelters, a bit of a playground. 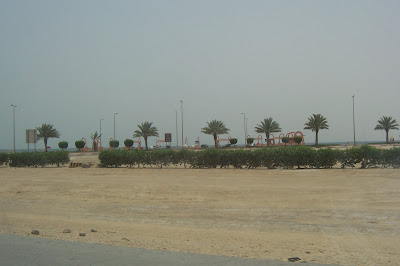 A bit desolate looking this time of year.

But our little bay was great! 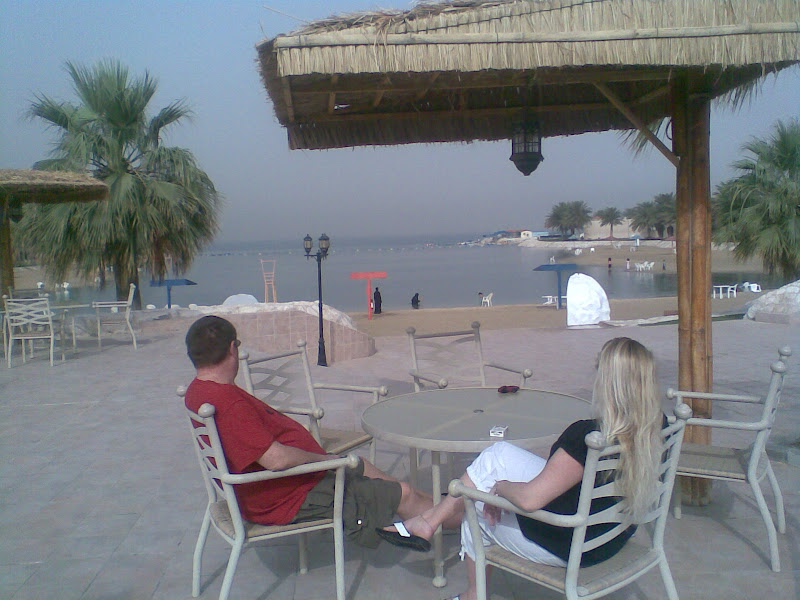 The hotel management assured us that we were quite free to dress as we pleased within the resort. So we were delighted to slip into our bathers and splash around while the other women chose to swim in their abayas.

We found that the water was extra salty and therefore incredibly easy to float around in. 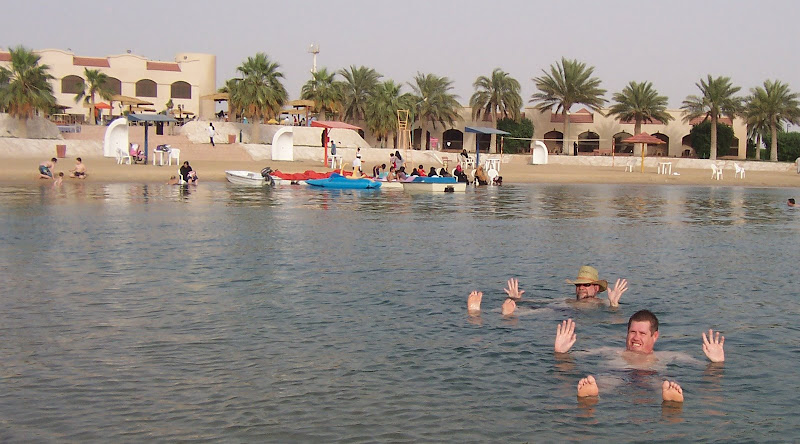 While you're laughing at the boys floating around,have a look at the folks in the background. Spare a thought for the ladies in their abayas sitting on plastic chairs in the edge of the water.

And the covered ladies paddling around in the boats, and on jet-skis - quite a sight.

Did we have a relaxing time? 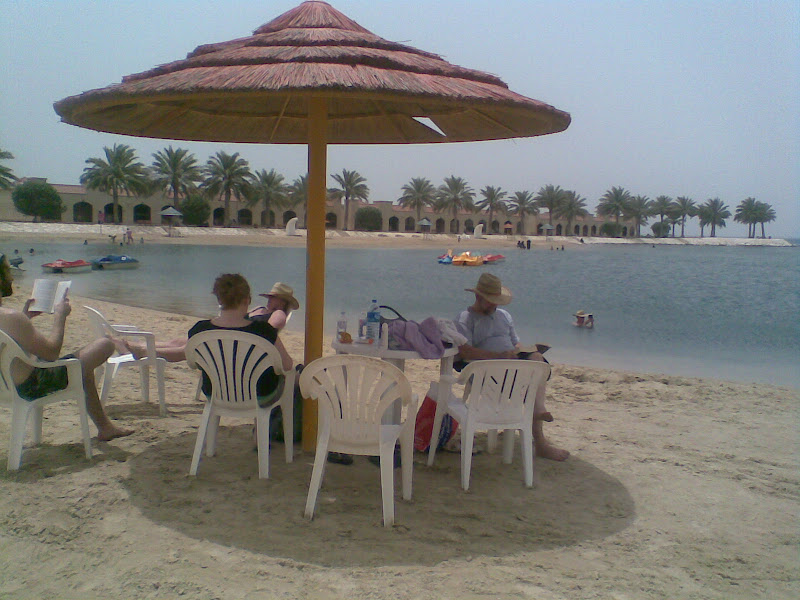 Now THIS is how we like to relax! Outside with a gentle breeze and a good book.
Posted by Ruth at 9:09 AM

Ruth
Butler, WA, Australia
I am officially retired and staying put in a quiet suburb near the beach, after living in the Torres Strait in the '80s (A MERry Life), 2 years in China (Howling Pigeons of LongHu), a year in Turkey (Turklish Adventure), working in the UK (The British Job, and Porridge in Norwich), working in Saudi Arabia (Howdi Saudi), holidays around the Pacific (Not Riyadh), working in Queensland (How woomba is TOOwoomba, and Brisbane Master Class), and working in Malaysia (For we are jolly good fellows).